I'm still not done, but thought I'd throw up some pics of a blown ribbon burner forge I'm currently building.

Started a few weeks ago, and just tonight finished welding up the forge body. Things move slow around here sometimes.....

Started off with an old purged 20lb propane tank. Welded on the some angle scraps for feet, then started laying out my doors. and burner hole. 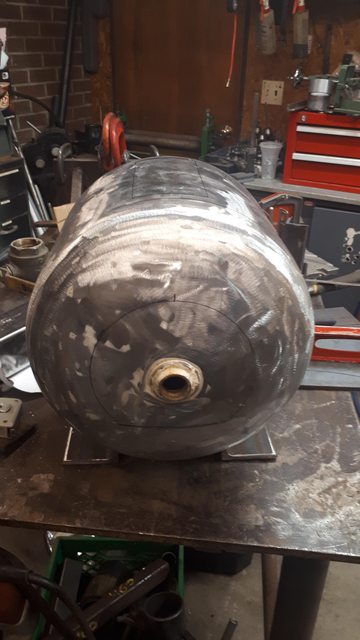 Plasma made quick work of it. 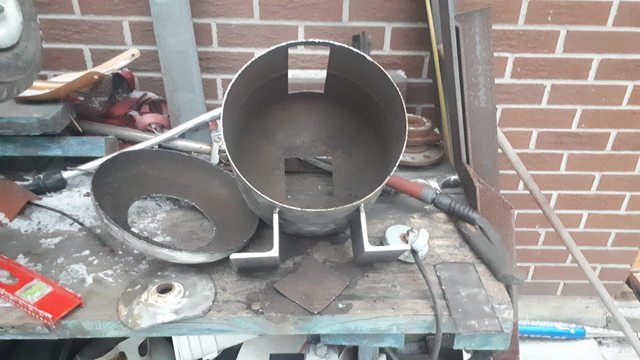 Then is was time to make the ribbon burner. It started life as a 3x3"x6.5" square tube. I made a diffuser plate, and capped the ends. Also welded in a 2" pipe stub. 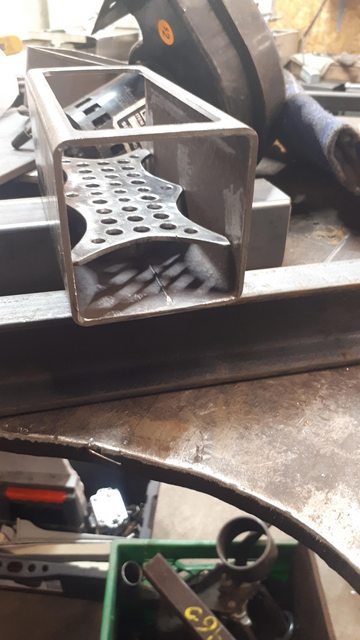 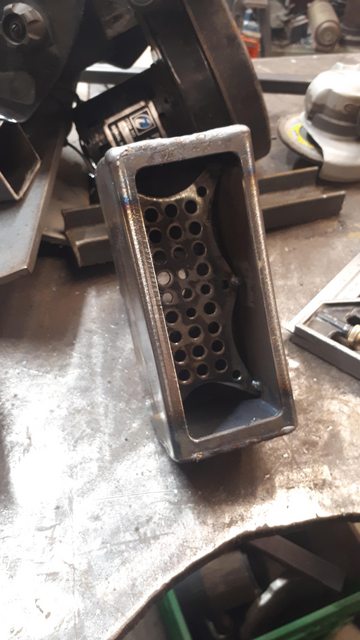 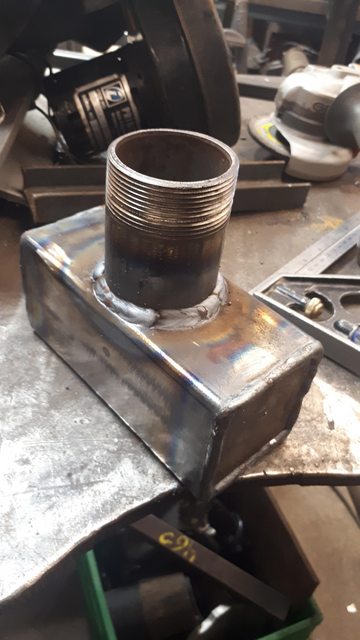 Then is was time to make a mold box, and steal some of the kids crayons. Not shown is the bottom plate where I drilled a pattern of 5/16" holes to hold the crayons for the refractory pour. 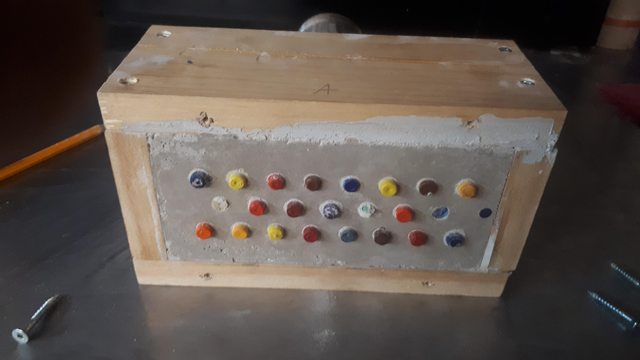 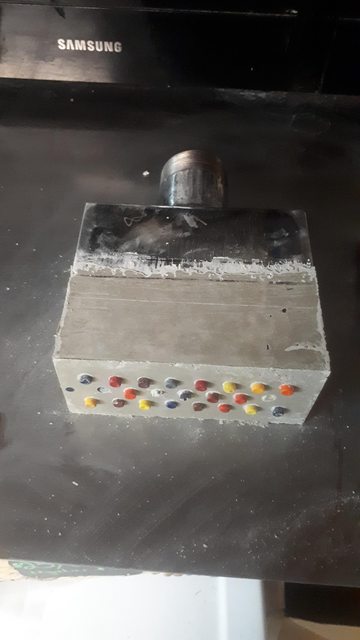 Then it was time to let everything acclimatize in the shop for a few weeks before getting back to it again today.....I didn't take many pictures today as I was going, I just wanted to get it done, but here's where I'm at with it. It's all ready to be lined with 2 layers of 1" 2600* rigidised ceramic blanket, and a 1/4-3/8" kast-o-lite 30, with a poured floor. I have some itc-100 for a top coat too. 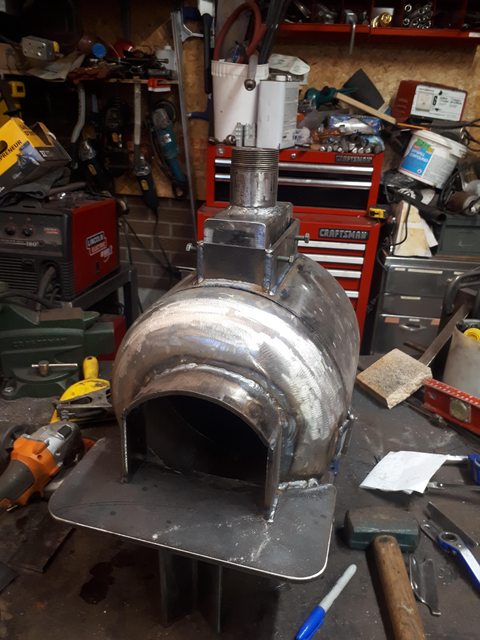 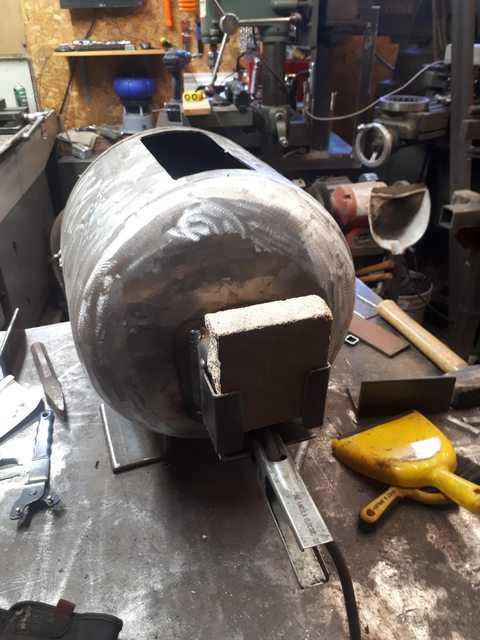 I still have to make a cart to hold the blower, etc, but hopefully it won't be 3 weeks until I get back to it again. I'll try and get on that, and lining it this week. Hopefully.

Very nice build, I keep thinking that I want to make one too, then my shoulders start to remind me why there's no rush.
However, since I already have some old tongs, hammers, an anvil shaped object, and a decent post vice, I will be keeping a close eye on your progress. No rush though...

I find the whole push fire down concept to be comical, it’s a beautiful forge.
D

I know it's been a while, but i've been chipping away at in in bit's an pieces.
it's been lined with 2" of 2600* wool, rigidized and fired (with a weed burner because I don't have the ribbon burner done yet. I still need to line it with cast o lite. 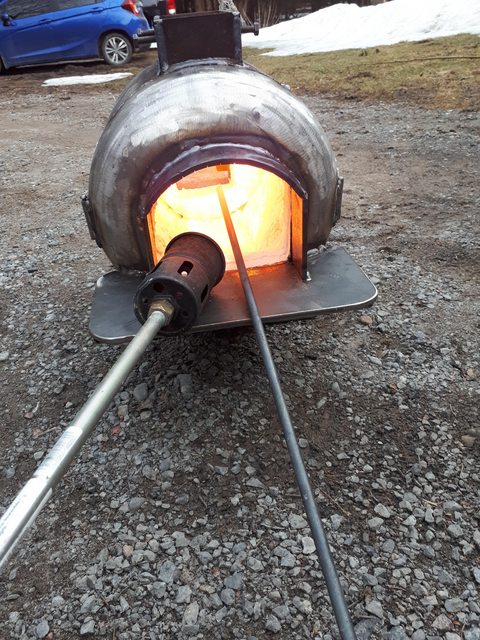 Couldn't help but stick another "iron in the fire" while I was at it. A recurring theme in my life.... 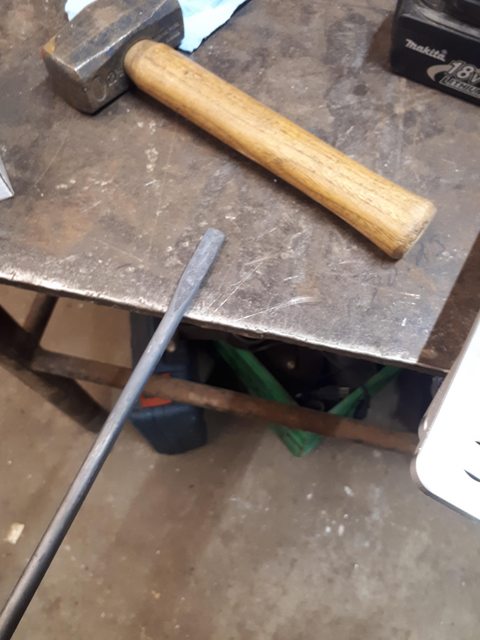 I will be making a combined coal forge, propane forge cart for it next, but have a few other projects in the queue first.
D

I also thought my cute little weld on hinges would have been enough to have the front hinge open, and close up nice and tight, but they're just too sloppy, so I ended up stitch welding it up again in a few spots around the perimeter. So much for plans lol.

Premium Member
I like the idea of the ribbon burner! That would spread the heat much more evenly. My current propane forge that I purchased from Hall Knife and Forge is a rectangular forge with three large burners pointing straight down. That definitely creates some hot points, but that forge is only used for shaping.

Dan Dubeau said:
I will be making a combined coal forge, propane forge cart for it next, but have a few other projects in the queu
Click to expand...

I've been thinking of making the same sort of cart for my shop. My propane forge is too small to fit the larger items like the skillet I forged, so I'm planning on building a coal forge for that purpose. The thing is I would need to find a way to fit both the coal forge and the propane forge in my shop.
D

I was sold on the Ribbon burner idea since watching the essential craftsman a few years ago. I really want to learn pattern welding. Just took a while to get the wheels in motion. All my projects are long drawn out affairs in various stages of completion lol.

I don't really have a spot for this in my shop either, but I have a few sheds/outbuildings I could turn into a blacksmiths shop in the backyard. Undecided which one will get the nod yet, as they all need the same amount of work (knocked down and rebuilt lol), but at the moment I plan to make things portable as much as I can. Some have power running to them, some HAD power running to them, it's all a mess TBH.

I did burn out the crayons and cure the ribbon burner last weekend though. With the weed burner shoved in the end I got nice even distribution of flames out the holes and nothing blew up, so that was a plus to know my baffle plate worked and the burner didn't fall apart . 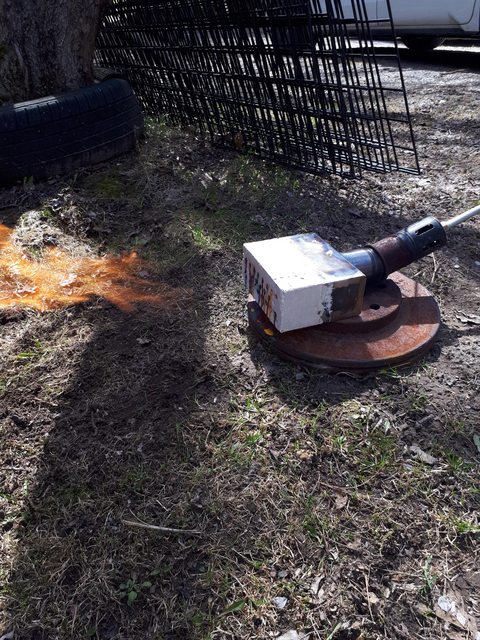 I still need to line the forge with kastolite. I did bring it into the basement last week, so it IS closer to being done......I gave a couple 2" pipes for my blower to a buddy of mine to thread for me (HVAC guy) and still haven't got them back, so I'm blaming him for the forge not being done .

Premium Member
Does a ribbon burner not use any orifices to force the gas, or is it inside that box? In other words, how would the propane be evenly spread out every hole?
D

Mine is a forced air style, where I'm going to use a bouncy castle blower, and a propane jet in the airstream. Jet size is not all that important like on a venturi burner. Some guys just dump the gas straight into the blower pipe, and stick some bent sheet metal scraps into the pipe to create turbuleance to mix the charge. I'm going to have a straight pipe coming in the end, with a ball valve/solenoid valve combo on the end and a drilled out bigger mig tip for a jet. The elbow, and the internal baffle plate (shown inside the burner head in post one) should mix the gas/air enough, and evenly distribute it through all the 23 holes. I hope so anyway. I can tune the airflow, and gas with ball valves. I kinda shot from the hip on this after watching a bunch of videos, and reading a bunch of forum posts. Plus trying to do things my way a bit and trying to visualize the airflow inside the burner. We'll see how it all works when I finish the blower portion. My build was based on stuff I already had lying around. 2" pipe, ball valves, bouncy castle blower, steel and 20lb propane tank.

There are also atmospheric venturi style ribbon burners, that would be like the ones on your forge. They have a refractory head like mine with many smal holes, but an appropriately sized tube and jet and air control on the backend. I don't really know much about them, and only recently found out they exist. The weed burner stuffed in the back works similar. My ribbon head wouldn't draw like that on the weed burner until it got hot, then I could get a nice even flame from all the holes with the burner in the back

I went with forced air because I already had the blower, and will be using it in a spot with hydro. Forced air are also easier to tune too, and more forgiving. I've also got a solonoid valve inline with the blower too in case the power ever goes out....very important part.....

Seeing as how I'm laid up on the couch right now from a day of trying to act young again, I had some fun in ms paint and just made this pic. Up till now the plan has been in my head and whatever was in my junkpile. But this is what I'm shooting for. 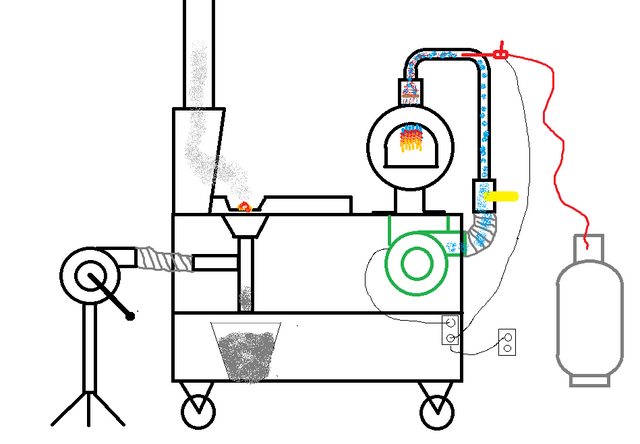 I didn't draw the hammer/tong rack all the way around the cart Wife says I may have got a bit carried away with it lol. It happens.
C

I just got mine up and running the other day. Still playing around with the pressure and blower speed settings.

Very nice looking forge. I don't see me getting back to finish mine until the end of July. Too much other stuff on the go right now.

Do you mind sharing any details of the burner block and blower? I have a blower similar to that, but didn't think it would put out enough airflow to be useful. Seeing yours run changes my mind a bit. The other blower I have is a bouncy castle one, which I think puts out too much air, so a bit of a Goldilocks problem. I'd rather run the smaller one if it would work.
C

Dan Dubeau said:
Very nice looking forge. I don't see me getting back to finish mine until the end of July. Too much other stuff on the go right now.

Do you mind sharing any details of the burner block and blower? I have a blower similar to that, but didn't think it would put out enough airflow to be useful. Seeing yours run changes my mind a bit. The other blower I have is a bouncy castle one, which I think puts out too much air, so a bit of a Goldilocks problem. I'd rather run the smaller one if it would work.
Click to expand...

Dan Dubeau said:
Very nice looking forge. I don't see me getting back to finish mine until the end of July. Too much other stuff on the go right now.

Do you mind sharing any details of the burner block and blower? I have a blower similar to that, but didn't think it would put out enough airflow to be useful. Seeing yours run changes my mind a bit. The other blower I have is a bouncy castle one, which I think puts out too much air, so a bit of a Goldilocks problem. I'd rather run the smaller one if it would work.
Click to expand...

Our ribbon burners are practically identical with the exception that my perforated diffuser is bent and looks like a tent with the peak towards the gas inlet. Also, your burner appears to be slightly deeper, perhaps 1/2" or so. I will post the blower data plate for you tonight. The blower is from a hot water tank and seems to very work well although I need to figure out the right propane pressure vs throttle valve position vs air flow; for some reason the naturally aspirated burners seem to be more intuitive to tune. I think the bouncy castle blower would be over-kill to the point of making your fuel mixture too lean and not combusting properly or even not combusting at all. I have video at various gas setting which I can try to send you or post if you are interested.
C

Apologies for the late reply. Here is the data plate from my forge blower.