#1
Last week I inquired for a friend about a granite surface plate here in Ontario. I asked the typical questions including what grade it was and wether it had been calibrated recently. The owner got back to me, that if I wanted, for a whistle, a song and some bread crumbs he’d throw in this “tool” he had for measuring surface plates. I asked for his number and couldn’t dial fast enough. I told him that I had been inquiring about the plate for a buddy but what was the “tool”. I already have an autocollomator and I had my fingers crossed that he wasn’t going to say “autocollimator”; he didn’t. He said (I was dying in the suspense). The second he starter with the Rah..... sound I knew what it was and I wanted to finish the sentence for him, but I bit my tongue. If any of you fish, (I try but am horrible) it is like when you get a really big fish on line that is in no way supposed to be able to handle the fight you now have on your hands. You’re excited, scared, and a bunch of other emotions all at the same time.... I digress

....n Repeat -O - Meter. I told him I’d take it and asked for his coordinates to sent the E-Transfer and within 15 min I had some pics, he had payment (1 whistle, 1 song, and a healthy handful of bread crumbs). By lunch it was on it’s way and I had a Canada Post tracking number.

It arrived today, nicely packaged and both safe and sound. I poured a cup of tea and went down to the shop and opened the package like an 8 year old on Christmas morning. Here it is...... in all it’s glory; and in what I would describe as “brand new” condition.

I count myself fortunate to have this awesome little piece of kit. Thanks for reading to this point..... my wife thinks it is a stupid chunk of metal, and when I tried to explain she just laughed, called me a nerd and walked away. Just wanted to share with some of my “Pals”.

Cheers all, no you can’t borrow it. LOL. 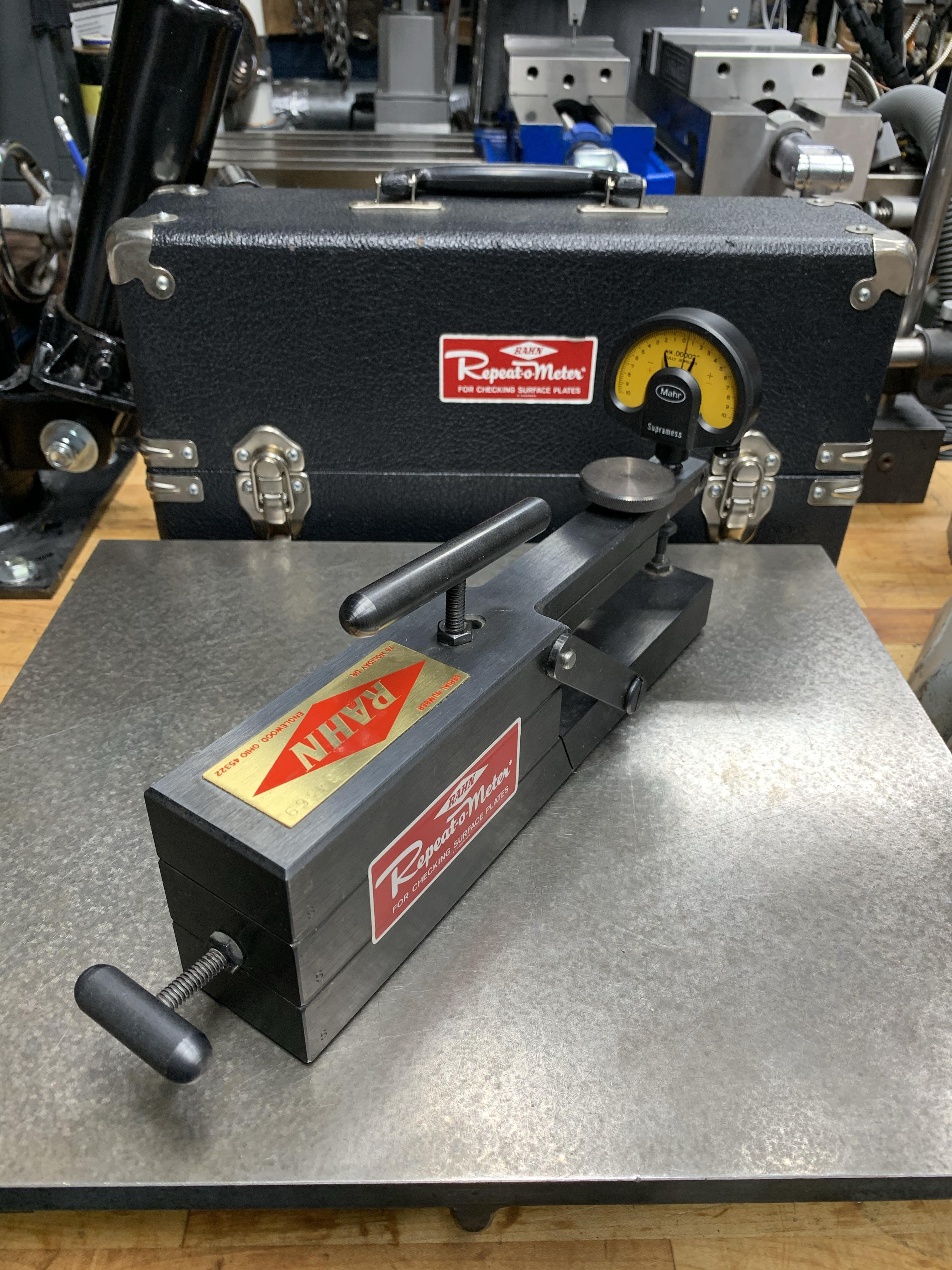 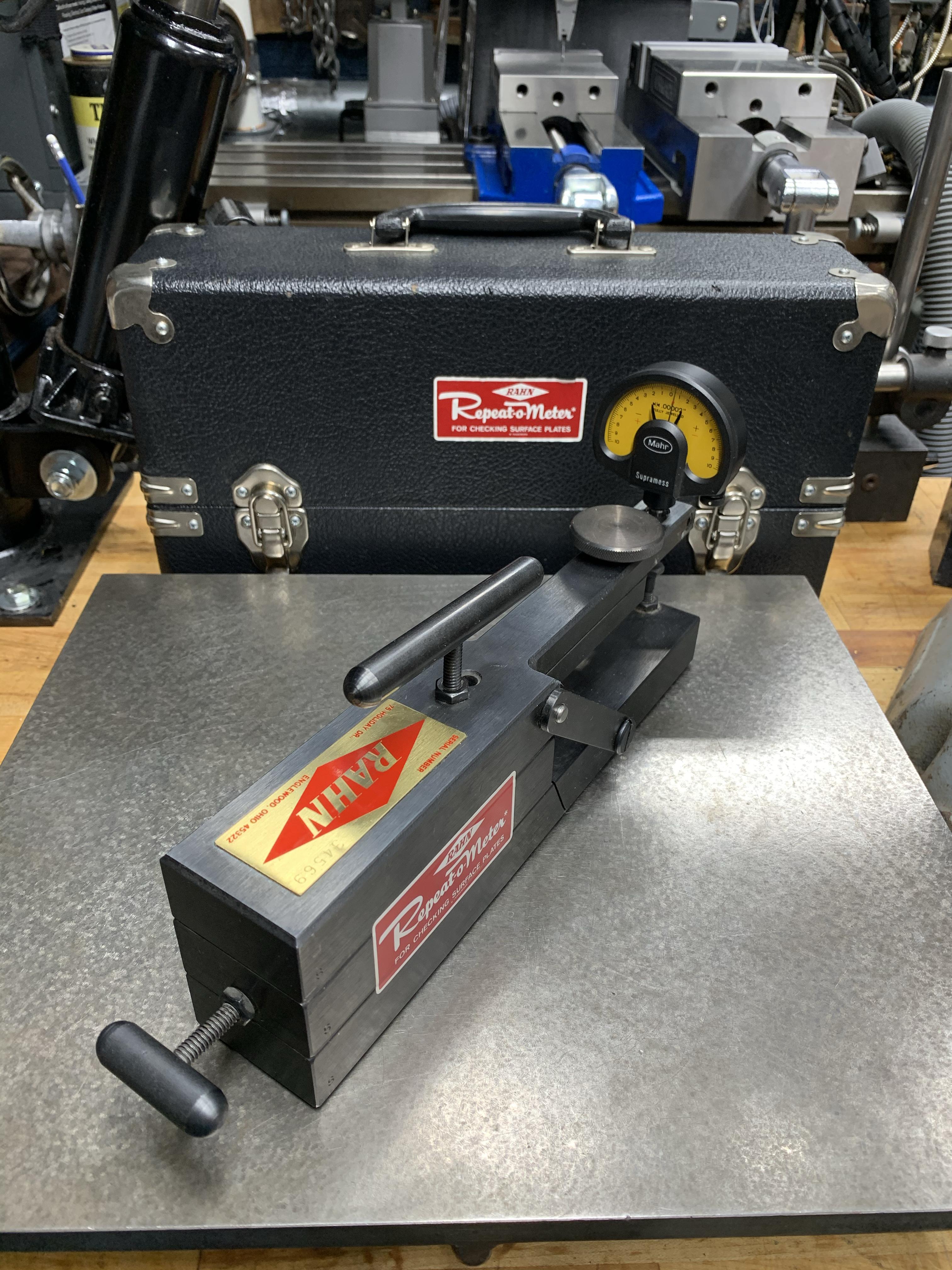 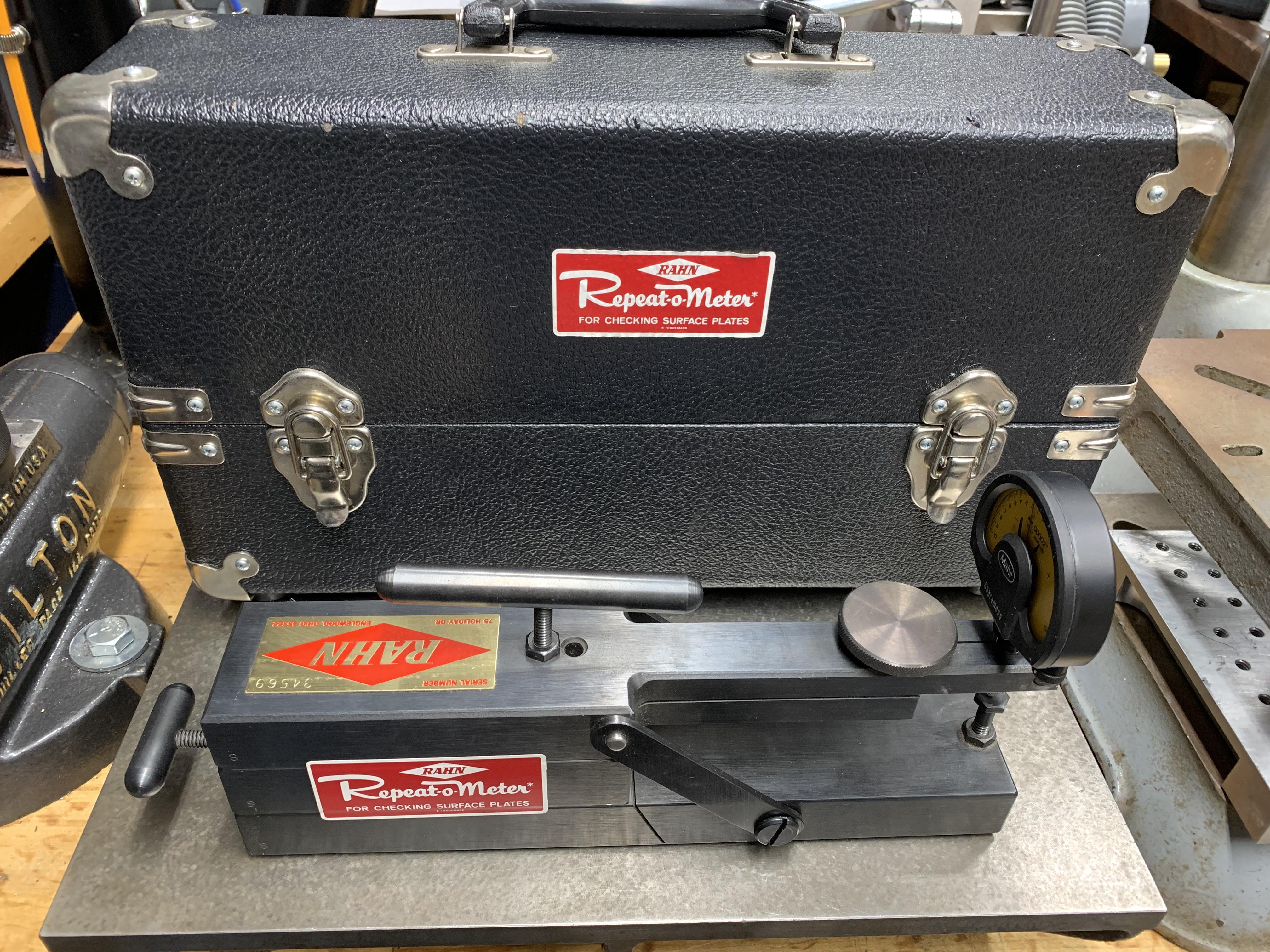 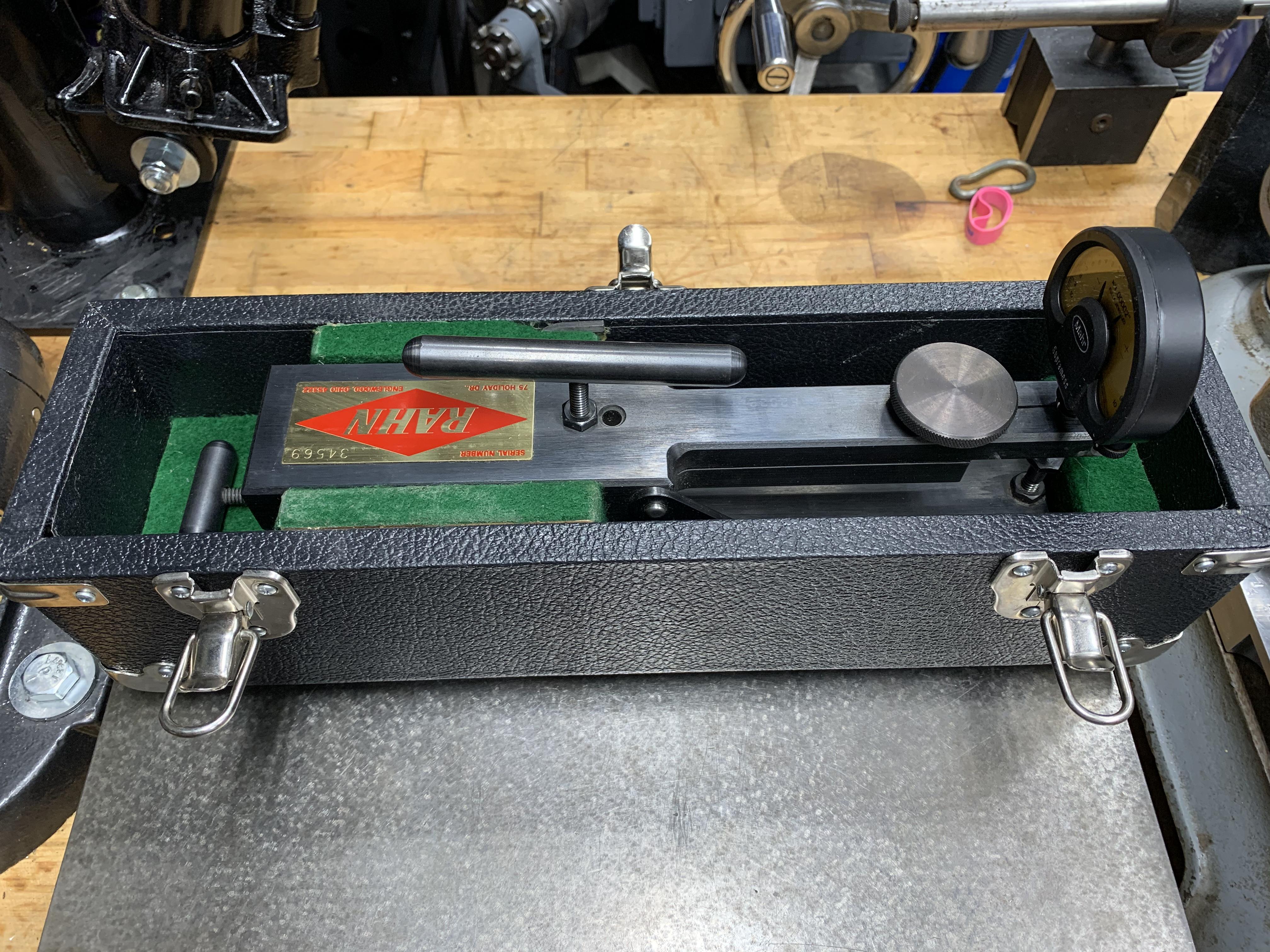 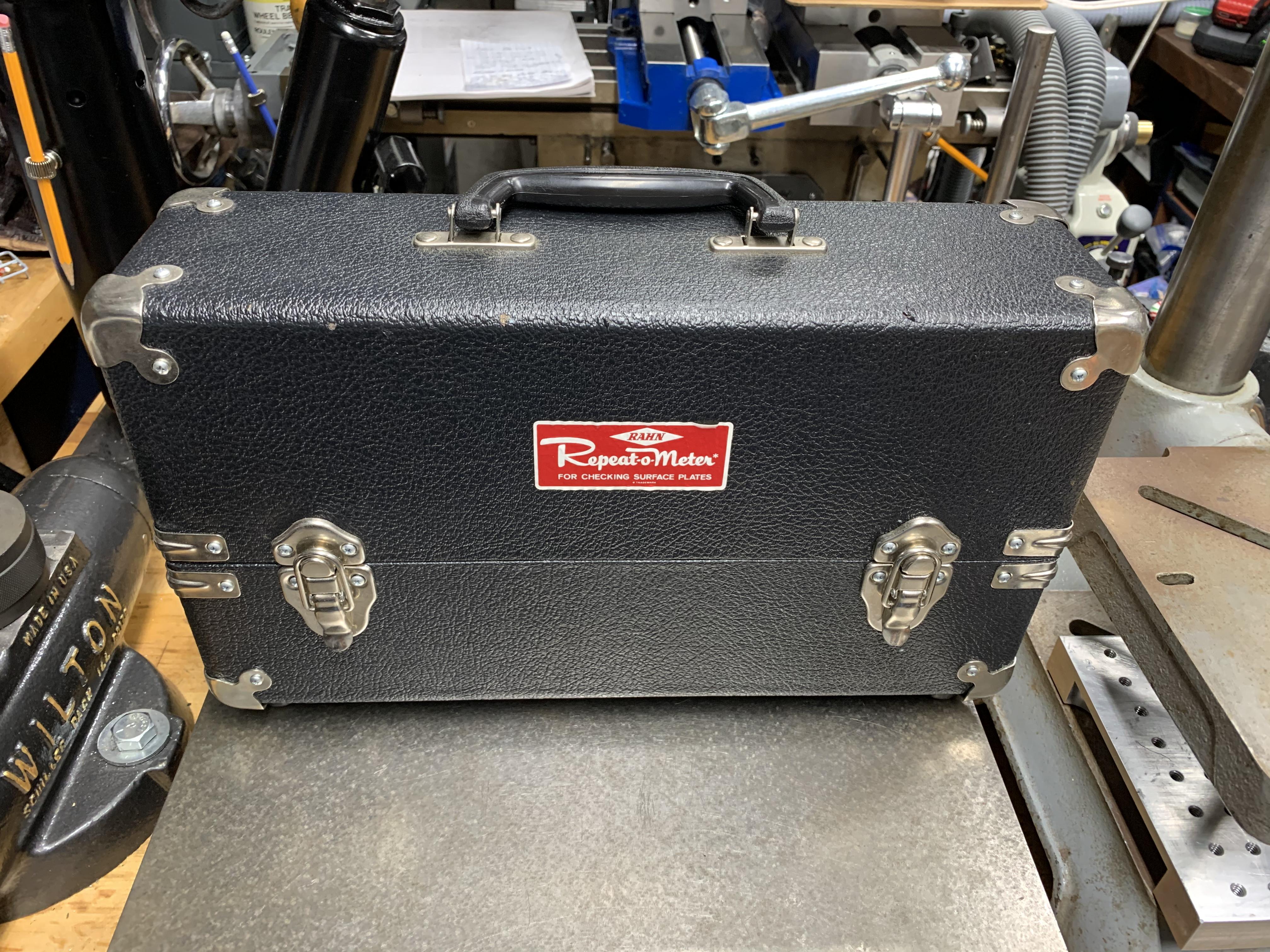 Premium Member
#2
Never heard of it before, but nice score.

#3
Your wife calls you a nerd to eh Nice score!

Now you have to explain what one does with it

Administrator
Premium Member
#5
What's the scale on that dial? 0.00002"? one fifth of a tenth? So how accurate is your plate?

#6
wow I've wanted one for 30 years! you lucky dog! AND an autocolumnator! wow!!

#7
@Janger, it was available with a Mahr indicator that read in 2 millionths and 20 millionths of an inch. Mine reads in millionths of a meter but *sigh* not repeatograph to go with (yet!)...
T 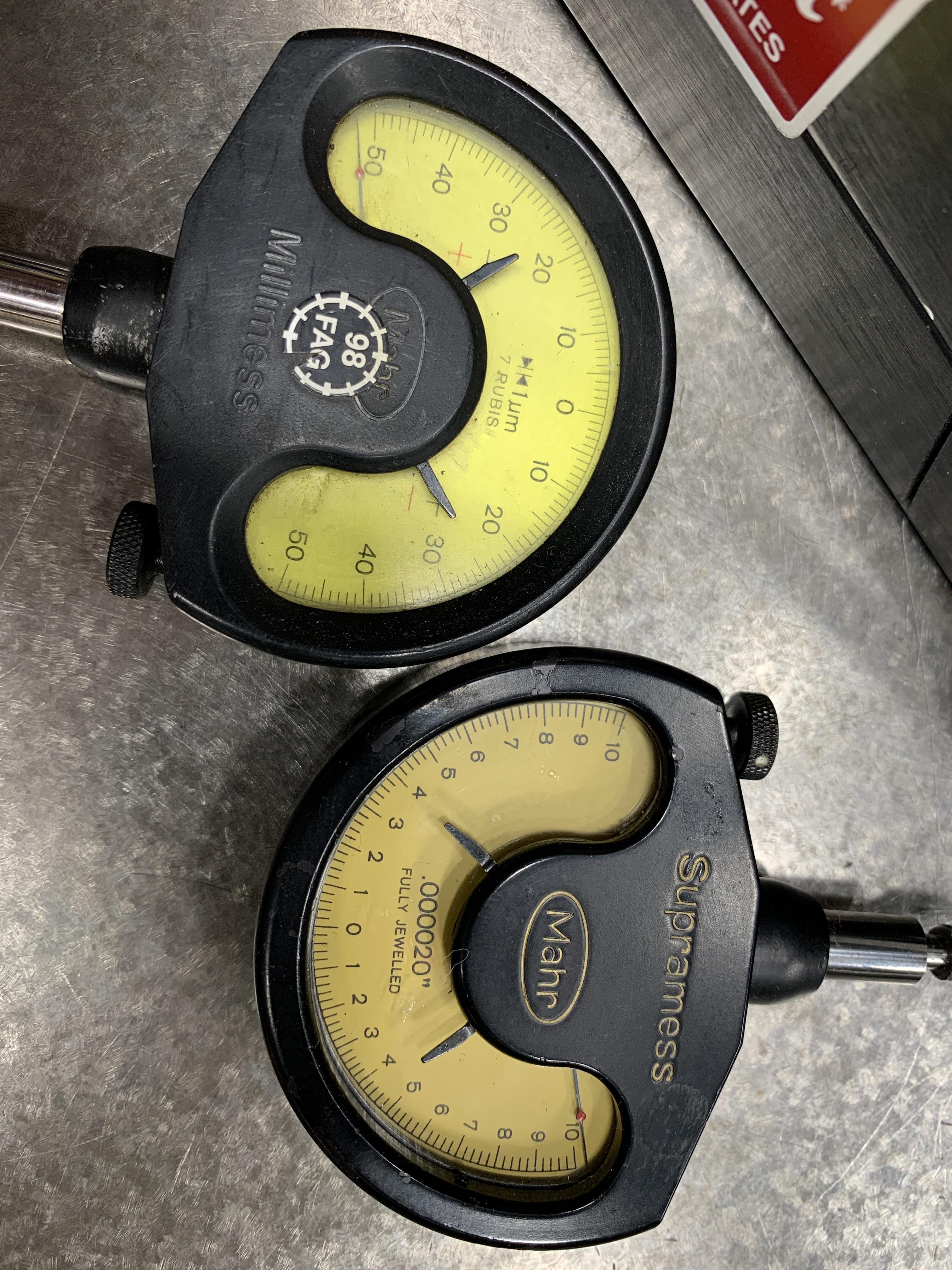 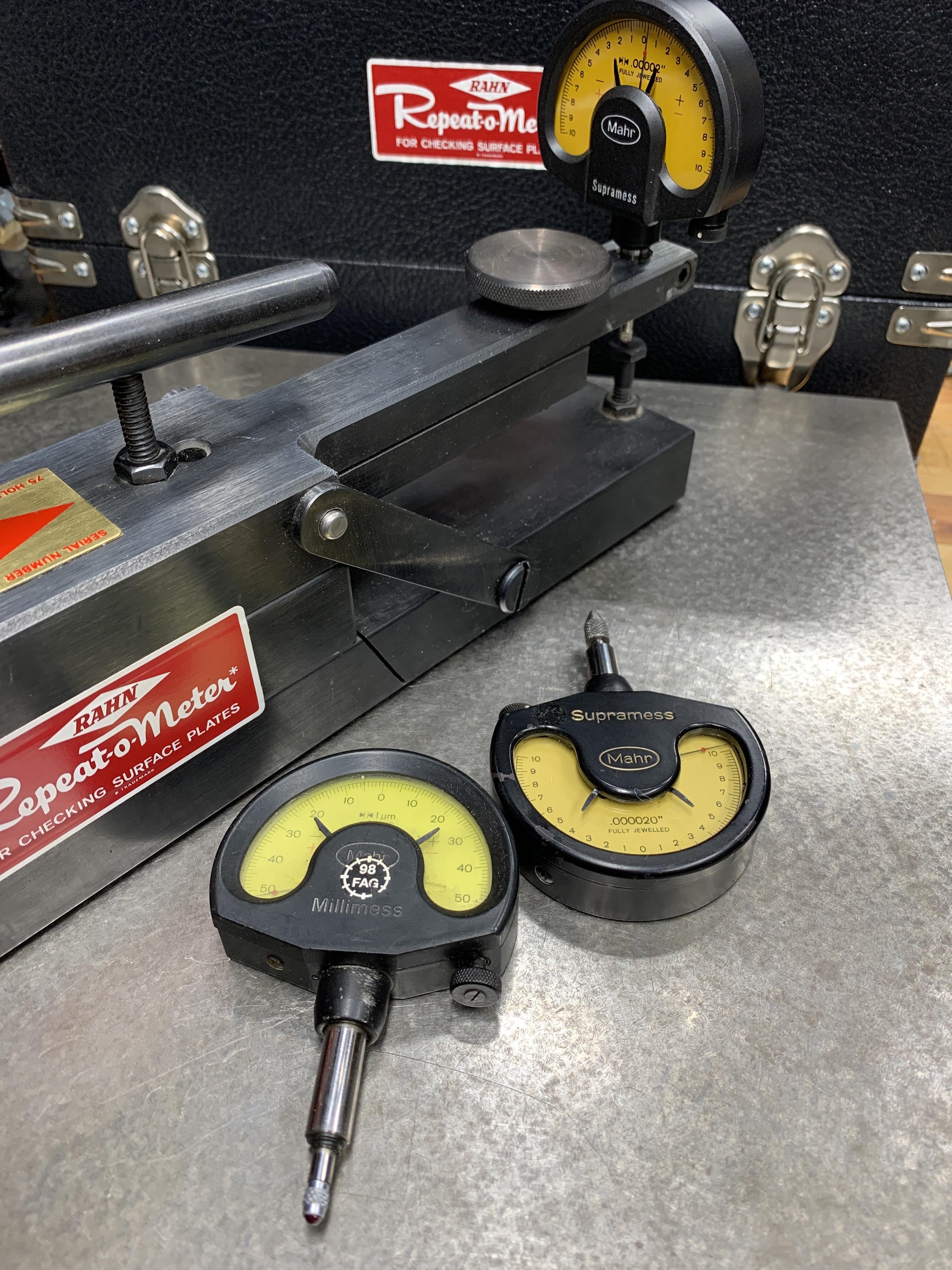 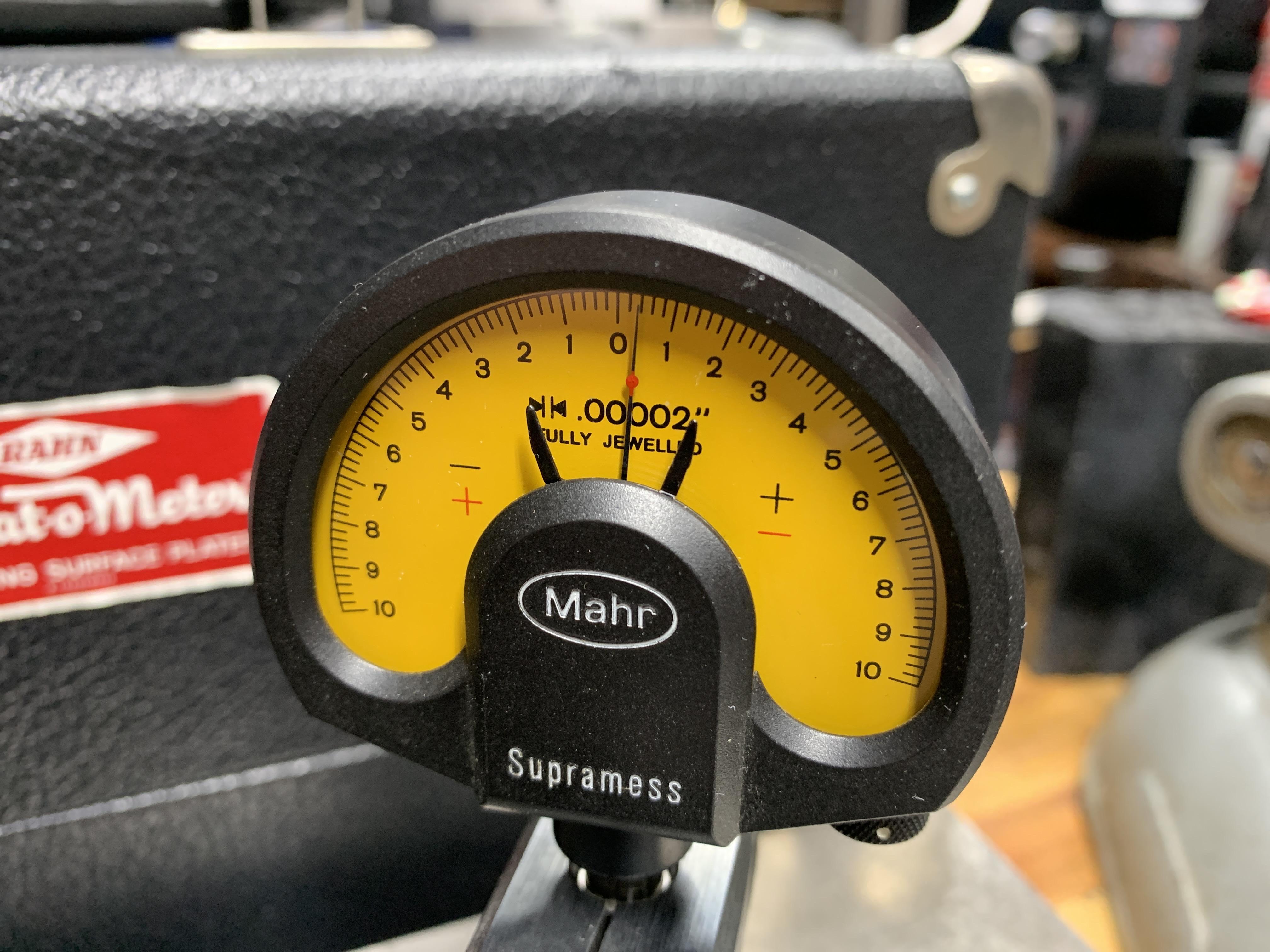 On the Rahn, it came with a .00002 Mahr Surpramess indicator. I have these other 2 indicators as I was planning to scratch build a Repeat-O-Meter. I’m guessing I’ll keep the Millimess but I plan to sell the Supremess.


Sent from my iPad using Tapatalk

I have a granite 18X24 mitutoyo AA plate I bought used, but I will one day build a repeatometer and check it. There are no metrology labs in the West that can check a surface plate. sigh**.

#11
So..... I looked this thing up and came up with this "Detects local error, not overall flatness". What's the point?

I thought the purpose of a surface plate was to provide a flat reference?

Premium Member
#12
The least you could do was put some dust on the case so we're less envious!
What a score!

TOgether they can be used to certify a surface plate.

#15
Cool like new and super precise..what a good combo. I wouldn't know what to do with it myself but I can appreciate the joy of owning one. Congrats

Premium Member
#16
Lol...Got to love stumbling across great tools! Keith Rucker just did a video on getting his Repeat-o-meter and had been watching out for one for almost a couple of years. Enjoy the life of high precision!!

Premium Member
#18
Anyone wanting a new one? Starrett has taken over the patent on the Rahn and selling for $1734USD!!
P

Premium Member
#19
Nice score.
Just for kicks one day if the opportunity presents, I'd like to see a real life reading of Busy Bee (or similar) cheapo granite. They claim good numbers within the specified grade reference, but I mean who really knows. Not advocating relative value, more just morbid curiosity. Of course a Monday BB granite might be different than a Friday granite too LOL

#20
PeterT said:
Nice score.
Just for kicks one day if the opportunity presents, I'd like to see a real life reading of Busy Bee (or similar) cheapo granite. They claim good numbers within the specified grade reference, but I mean who really knows. Not advocating relative value, more just morbid curiosity. Of course a Monday BB granite might be different than a Friday granite too LOL
Click to expand...
Shars granite squares were out of spec by a lot, Some members of another forums posted.
You must log in or register to reply here.
Share: Facebook Twitter Google+ Reddit Pinterest Tumblr WhatsApp Email Link